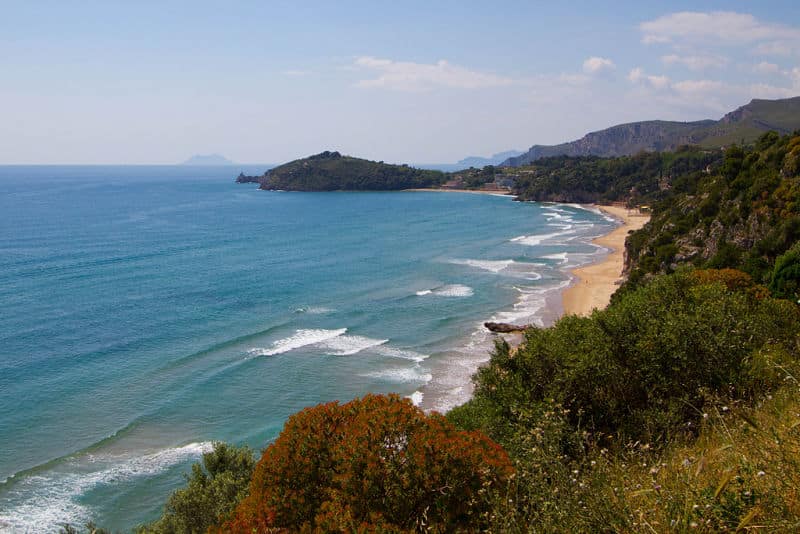 The beach of Torre Olevola is located within the municipality of San Felice Circeo, and falls within the Circeo National Park, in the province of Latina, in southern Lazio, and is the last of the coastal towers that in sequence, along the Riviera di Ulysses, along the coast from San Felice Circeo to Terracina . It is a thin strip of beach, bordered by breakwaters, and identified in the coastal tower, the Torre Olevola. The tower is an integral part of a defensive system designed and built to defend against Saracen incursions. The first mention of "turris Euole" is found in a document dating back to 1469. Also an ancient map of the great Leonardo Da Vinci shows a representation of this tower, in a map drawn for the great reclamation of Pope Leo X. The beach of Torre Olevola is composed of soft and golden sand of medium grain, which alternates with gravel, the sea in this stretch is transparent and blue with beautiful shades from turquoise to ultramarine blue, with a bottom that slopes down quickly enough, ideal for swimming and for the more experienced swimmers, and the beaches in this area are never crowded, even in the height of summer. This beach is surrounded by Mediterranean scrub with dwarf palms, myrtle and broom. Not far from the seafront there is a large paid parking lot, which allows the guests of the beaches to leave the car safely and peacefully. Torre Olevola beach can be reached along the SS 148 Via Pontina da Roma, taking the Levante coast (from Olevola tower to the San Felice Circeo port), and along viale Europa towards Terracina. Continuing from Torre Olevola on foot you will encounter other stretches of free beach that are not too wide and not crowded. The meteorological station of Capo Circeo is located near the Olevola Tower. The beach of Torre Olevola is divided into a part of free beach and a part with bathing establishments and equipped beach. There are bars, restaurants, camping, parking, beach equipment rental.