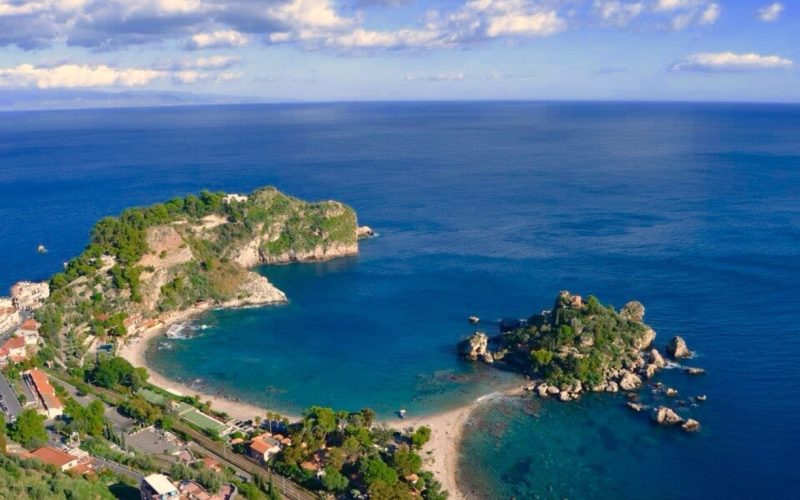 Taormina is a village that tells a story of different cultures that have followed and intertwined over the centuries. The symbol of the town of Taormina is a circular baroque fountain, made of Taormina stone and located in the Piazza del Duomo, which also deserves a visit. The Greek theater of Taormina is an archaeological site that attracts thousands of visitors every year: it is a building from the Hellenistic period rebuilt in Roman times, where numerous events and representations are still held during the summer. Famous throughout the world for the beauty of the coast and for its historical, artistic and architectural heritage, Taormina offers splendid wide and equipped beaches, but also lesser known and equally beautiful coves. END_OF_DOCUMENT_TOKEN_TO_BE_REPLACED

ISOLA BELLA BEACH Isola Bella beach is located right in front of the center of Taormina, at the foot of the town and in front of the small island of the same name. It is a beach of white pebbles of varying sizes, with a crystalline sea in emerald green and deep blue and a seabed that rapidly descends, becoming immediately deep. To get in the water, it is advisable to wear shoes with rubber soles if you are not used to walking on pebble and pebble beaches. The Isola Bella beach is divided into a stretch of free beach and a stretch with bathing establishments, where you can rent sunbeds and umbrellas or you can take advantage of the bars for a refreshing drink or a quick meal. Near the beach it is very difficult to find a parking space, it is also not very cheap, so you can decide to park at the top and go down the steps to the beach. Beach recommended for lovers of diving and snorkeling .

BEACH OF MAZZARÓ The beach of Mazzarò is divided from Isola Bella by the rocky promontory of Capo S. Andrea, with its caves that can be visited with special rental boats or diving enthusiasts. Here is the Blue Grotto, several meters long, with the blue color given by the light that filters through the water. This beach, along with the Isola Bella beach, has always been frequented by locals, but over time has been increasingly appreciated by Italian and foreign tourists. It is a beach formed by pale pebbles with a crystalline sea and a seabed that rapidly descends, becoming immediately deep. It is almost entirely equipped beach, with the possibility of renting sunbeds and umbrellas, and with bars and restaurants on the beach, even if it resists a few meters of free beach here and there. The Mazzarò beach can be reached on foot by descending from Isola Bella or starting from the center of Taormina with the cable car which, through an underpass, leads directly to the beach.

SPISONE BEACH Spisone beach is larger and quieter than Mazzarò beach. In the southernmost part this beach is formed by rocks overlooking the sea and breathtaking views, while going north and approaching Mazzeo the beach becomes wider and without rocks, with light-colored fine sand and small pebbles. The beach of Spisone is divided into very few stretches of free beach and many stretches of bathing establishments, where it is possible to rent sunbeds and umbrellas, eat in the bars or enjoy a meal in the restaurants. In the evening, some of the beaches are transformed into open-air discos . Being near the Taormina tollbooth, this beach is easily accessible, and for this reason it is very popular.

VILLAGONIA BEACH Villagonia beach is easily reachable from the center of Taormina. It is a beach located within a natural gulf formed by rocks and pebbles with crystal clear sea that gives beautiful colors, from emerald green to intense blue. This beach is located near the wonderful and famous beaches of Giardini Naxos, and very close to the Taormina-Giardini train station.

BEACH OF MAZZEO The beach of Mazzeo is one of the lesser known beaches of Taormina, but it is very wide. It is a pebble beach with crystal clear sea that quickly slopes down, becoming immediately deep. The seabed is very rich in marine flora and fauna, much loved by diving and snorkeling enthusiasts. It is divided into stretches of free beach that alternate with stretches of bathing establishments. In both cases the area is well supplied with bars and restaurants and all kinds of commercial activities. Some bathhouses on the Mazzeo beach are accessible to dogs, and can be reached from Taormina with the beach bus that stops on the coastal road, where you immediately reach the beach.

NAXOS GARDEN BEACH In ancient times the name of this town was only a Gardens, then it was joined by Naxos, the name of a Greek colony, and the double name was obtained. The beaches of Giardini Naxos are divided into sandy beaches and pebble beaches . The sandy beaches are located in the central area, which goes from the port to Piazza Kalkis, the other stone beaches are located in the Recanati area, where there is the discomfort of the stones but the water is splendid. The Recanati beach is composed of sand and pebbles and is very wide, divided between the free beach and equipped beaches, even if the equipped beaches are in the majority. Near this beach there are however refreshment points, bars and restaurants for a break that combines the pleasures of sight with those of the palate. The beach of Schisò is also very well known, it is set between a thick Mediterranean vegetation and the intense blue color of the sea. It is a beach of fine, golden sand, with equipped beaches, bars and restaurants but also some stretches of free beach. The beach of San Giovann i is composed of thin and clear sand, with the beautiful church of the historic center behind it. The beach of Porticciolo Saja is formed by a series of small coves composed of lava rocks that come out of the water. There is a canoe rental service for small, absolutely recommended excursions.