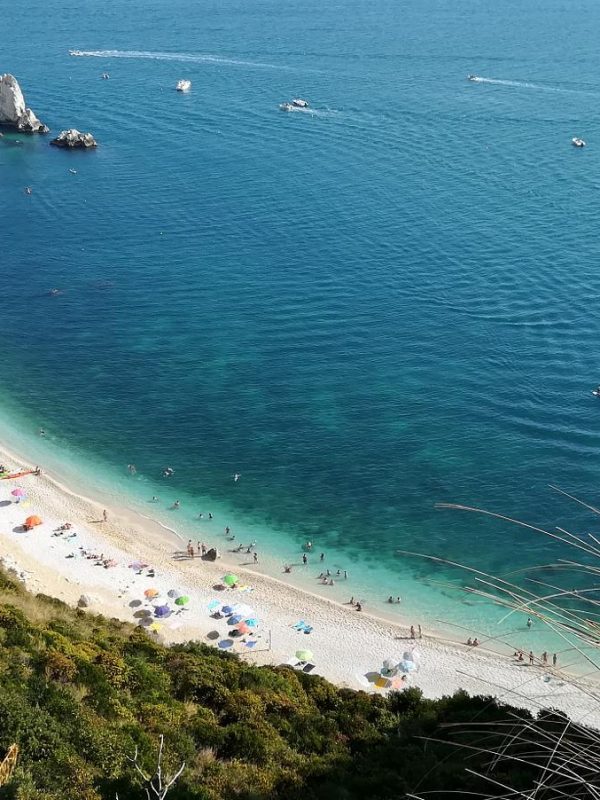 What are the most beautiful beaches of the Conero Riviera, in the Marche region?

The five most beautiful beaches of the Conero Riviera

This is the time of year when we begin to dream of warm places to lie in the sun and enjoy a few days of well-deserved rest, after a year of intense work. Are you still undecided on where to spend this long Easter Monday 2019 bridge or vacation? We propose the Conero Riviera with five of the most beautiful beaches in the Marche region: Portonovo, Numana and Sirolo the interested municipalities. At 572 meters above sea level, Monte Conero, located in the Umbrian Marchigiano Apennine complex, is considered the most important promontory on the Adriatic. Its immense sea cliffs, seen from the sea, offer a fascinating and overwhelming vision. And it is precisely on the slopes of this stupendous mountainous scenery that wonderful beaches are hidden that have nothing to envy from the Caribbean beaches .

Beaches of the Conero: Portonovo Bay

If you love to enjoy a breathtaking panorama without compromise and with all the comforts, the Bay of Portonovo is the one that's right for you. Immersed in the Conero Park, it is also called Baia Verde. A paradise not far from Ancona, where you can enjoy for free beaches, formed of gravel and stones, or take advantage of the many services offered in designated areas, and restaurants on the coast and that will allow you to taste typical local dishes such as "moscioli ”, The wild mussels of Conero. It is also a favorite destination for surfers and snorkeling enthusiasts . For the more adventurous, it is possible to follow the paths that cross the surrounding woods and reach the Clementine Tower, dating back to the eighteenth century, built on the tip of the Bay and become, with time, inspirational muse of poets and writers, of the caliber of Gabriele D announcement . Or you could admire the natural lakes: Lago Profondo and Lago Grande . A must-see place is the centuries-old church of Santa Maria di Portonovo, mentioned by Dante in the Divine Comedy . The beach of Baia di Portonovo can be reached by car or by public buses that depart from Ancona. The parking lots are paid, two are near the bay while the third is more distant but well connected to the beach with a shuttle bus service.

Beaches of the Conero: the Spiaggiola di Numana

Going further south, we find the beach of Numana Alta, called " Spiaggiola ", which offers a splendid panorama and the convenience of guaranteed services. Located inside a bay protected by the rocks and the tourist port of Numana, it is often considered a natural swimming pool . With a shore of fine gravel and an always calm sea, it is among the beaches of the Conero most loved by those seeking peace and relaxation. You can reach it on foot from the port or from the center of Numana, or take advantage of the shuttle bus service that leaves from the historic center.

Beaches of the Conero: Urbani Beach of Sirolo

A small corner of paradise can be found in Sirolo . One of its most famous beaches is the Urbani Beach, located on the slopes of the Borgo. In the shape of a crescent, it stands between the Urbani Cave and a wide cliff surrounded by greenery. Almost entirely equipped with several establishments, it still offers small areas of free beach. Formed of gravel and sand, this cove gives us a breathtaking spectacle of the imposing Monte Conero, visible from the small pier, as well as a wonderful natural cave.

Beaches of the Conero: Beach of the Sassi Neri of Sirolo

If, on the other hand, you need to really unplug and enjoy the wonder of a wild nature, what is right for you is the Spiaggia dei Sassi Neri, a magical and uncontaminated place in the town of Sirolo . No umbrellas and sunbeds, but a towel laid out on the carpet of sand and pebbles, where you can enjoy the view of the crystal-clear sea and the imposing promontory behind you. The clear water invites you to enjoy snorkeling activities and to admire the typical " black stones " immersed in the sea, which give the name to the beach. It can be reached via a path that starts from Sirolo, and enters the wood, until it leads you to the beach. There is also a shuttle bus service that leaves from the town center.

Beaches of the Conero: the Beach of the Two Sisters

Even more pristine and precious among the Conero beaches is the Beach of the Two Sisters . Wild place where you can enjoy nature in all its majestic splendor. It can be reached only by sea but you can get there by using the ferries leaving from the port of Numana . Thanks to its wild character and the marvelous transparency of the waters, where the two big stacks (the Two Sisters ) rest, this place has the right to be considered one of the most beautiful beaches in Italy. There are no services but the show it offers is really worth it.

Have you ever been to any of these beaches?

Tell us about your experience with a review, it could be helpful for those who are choosing the Conero for their holidays!