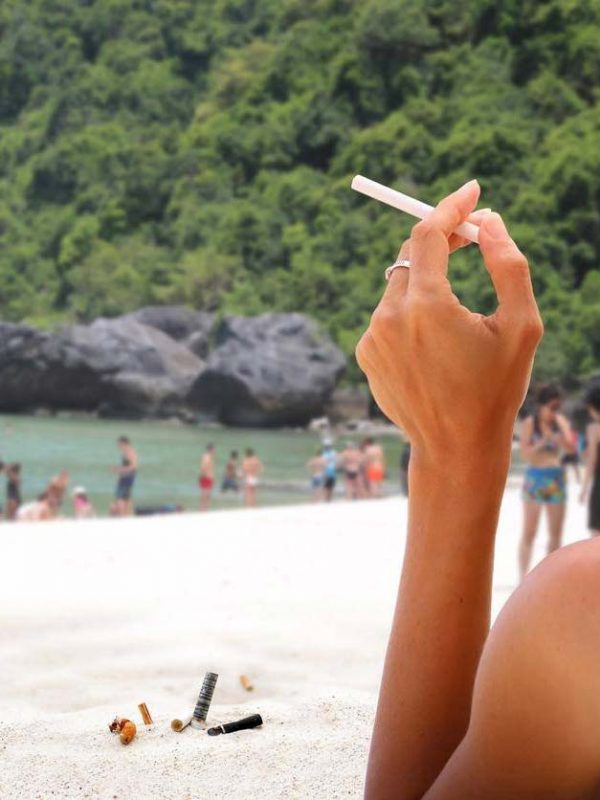 Smoke free beaches: what are they?

We often talk about smoke free beaches, the national media is giving them a lot of attention, yet there is so much confusion about it. Smoke free beaches are not beaches where smoking is allowed, but they are smoke-free beaches. The cigarette is therefore forbidden under the umbrella but allowed only in areas regularly used for this purpose.

In recent years, our country is taking more and more seriously its commitment to combating beach pollution, adopting both plastic free and smoke free disciplines and ordinances. The latter are designed to avoid the dirt caused by cigarette butts left on our beaches, as well as making the air breathed under umbrellas healthier. In sixth place, among the main abandoned litter, as Legambiente itself has found from its evaluation, cigarette butts represent a danger for the ecosystem . University studies have shown that a cigarette butt may need even some tens of years to deteriorate completely. We don't think only of the paper that covers it but above all of the polluting substances that are impregnated there after the burning of the tobacco. The sea, we know, is one of the main spies of this pollution, and more and more municipalities have decided to take measures, turning their coastlines into smoke free beaches .

Let it be clear that it does not mean banning smokers from Italian beaches, but simply giving them the opportunity to consume their cigarettes in special areas, away from umbrellas and from the shore, supplying them with undifferentiated containers to throw away butts without causing damage to nature. and respecting the health of non-smoking neighbors. In fact, according to a study conducted by the Anti- Smoking Center of the National Cancer Institute of Milan, passive smoking also exists on the beaches and is far from negligible. The first seaside resort that introduced smoke free disciplines was the beach of Bibione, in Veneto, with the initiative " Breathe the sea ", but with the passage of time, more and more municipalities and regions have adopted, or are taking care of put in place for summer 2019, such measures. Bibione is a fraction of the municipality of San Michele al Tagliamento, in the province of Venice and its beach has been classified in the top positions as regards the influx of tourists. Bordering the renowned Lignano Sabbiadoro, the beach of Bibione covers a strip of beach of 8 kilometers long and over 300 meters wide. Its very fine and golden sand comes from the Friulian Dolomites and is transported by the Tagliamento River, thus being able to be defined as native and 100% natural. The recognition of the Blue Flag, to this splendid coastal area, would seem almost obvious due to its numerous initiatives for environmental protection and the many services offered by the structures present along the entire coastal strip. In the immediate vicinity of the main beach there are some of the most popular beaches on this stretch of coastline: Bibione Pineda beach, the coolest and greenest area, where the beach is surrounded by a pine forest and where some campsites are. Just before Bibione Spiaggia rises Lido del Sole, also a quiet place surrounded by greenery. Ideal for families with children thanks to the summer entertainment service and the shallow and sloping seabed. Lido dei Pini instead is located just before the free beach that leads to the lighthouse. It is an area for nature lovers, surrounded by pine forests and rich in water birds and different botanical species. The beach of Bibione also offers dog-friendly services designed for our four-legged friends and for those wishing to enjoy a holiday in the company of their dog, they can go to Pluto Beach, at the eastern end of the Bibione beach. As we have already mentioned before, Bibione can be considered to all intents and purposes the first smoke free beach . The initiative began in 2011, when the smoking ban was introduced along the shoreline. The idea was to raise awareness of tourists rather than impose a ban and so, over the years, there have been many campaigns to inform and involve residents and vacationers with events dedicated to cleaning the beaches. The project " Breathe the sea " in 2019 has finally come to prohibit the use of cigarettes throughout the beach and allowing those who wish, to have access to the numerous, well-defined smoking areas. From Veneto to Sardinia, the smoke free beaches initiative, since last summer, has already had its successes in Stintino, on the beach of La Pelosa . The mayor, Antonio Diana, who extended the ban to all the beaches of Stintino for the summer of 2019, stressed with excitement that, during the last season, around 140 of the three designated smoking areas in La Pelosa beach were collected thousand cigarette butts. A result that underlines the enormous quantity of toxic waste that has been avoided by abandoning it on the coast, benefiting even in clean and breathable air. The beaches of Stintino, renowned and known by tourists from all over the world, arise in the northern part of Sardinia, in a small peninsula of the same name, facing the Piana Island. In particular, La Pelosa Beach is framed between the Asinara, the Faraglioni of Capo Falcone and the Isola Piana; just 5 kilometers from the village, this beach is a natural paradise. Its calm waters are surrounded by a fascinating Mediterranean scrub. Symbol of this beach is the Aragonese Tower of 1578, located on a front islet. The beach is made up of fine white sand, the limpid and slightly sloping seabed. There are numerous restaurants and equipped facilities along the road leading to the beach and in the nearby residential area. The area is completely smoke free with areas dedicated to smokers far from the shoreline. And you things do you think? Do you have a green soul too? We'd love to hear about your experiences on Italian smoke free beaches, so leave us a comment on the beaches involved.

Find out what are the smoke free Italian beaches on Trovaspiagge