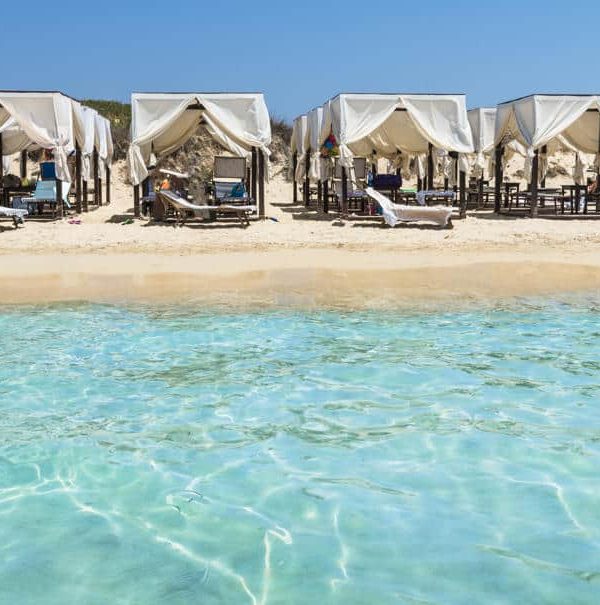 Salento beaches: where to go to the sea in Puglia

The most beautiful Salento beaches accessible and awarded with Blue Flag and Green Flag.

The five most beautiful beaches of Salento

The beaches of Salento, in Puglia, are among the most popular in our country. Every year thousands of tourists from all over Italy reach the Salento coast to spend their holidays both with their family and with groups of friends. Yes, because this is precisely the versatility of this stretch of coast, suitable for tourists of all ages: equipped beaches, free and wild, sloping seabeds that allow the smallest children to swim safely, large sandy beaches where organizing tournaments beach volleyball and thousands of species of flora and fauna to admire with a mask and snorkel. It is no coincidence that Puglia received three new Blue Flags from the FEE for the summer of 2018, a prize that shows how much the local administrations are attentive to the needs of citizens and visitors.

Where to go to the beach in Puglia? Which beaches of Salento are the most beautiful?

To find out which were the most beautiful beaches of Salento, that is in the whole province of Lecce, in the central-southern part of the province of Brindisi and in the southern part of the province of Taranto, we have read all your reviews and comments left on the site trovaspiagge. it and on our social pages Facebook and Instagram . We have further restricted the list of candidate Salento beaches by checking that they had at least one FEE Blue Flag and / or a Green Flag (prize awarded by the Italian Paediatricians Association to child-friendly beaches). In this way we have come to the conclusion that the most beautiful beaches of Salento are: – the Beach of Torre Guaceto (Carovigno, BR) – the Beach of Marina di Pescoluse (Salve, LE) – the Beach of San Foca (Melendugno, LE) – the Porto Cesareo Beach (Porto Cesareo, LE) – the Baia dei Turchi Beach (Otranto, LE)

The most beautiful beaches of Salento: Torre Guaceto beach

The Torre Guaceto beach, Blue Flag 2018, is located within the homonymous Marine Protected Area . Not the whole beach is bathing and accessible to the public, especially the one located in the protection zone A (marked with signs) accessible only with special authorizations. The beach is narrow and long and composed of fine-grained sand . The color of the sand has shades ranging from white to golden and varies depending on the stretch of coast. The color of the sea, like all the beaches of Salento, is crystal clear and of a wonderful turquoise that becomes darker as you move away from the coast until it becomes cobalt blue. Among the most important beaches in the area, both for a naturalistic motivation and for the presence of services and accommodation facilities, mention should be made of Punta Penna Grossa, another beach that has earned the Blue Flag for summer 2018. Torre Guaceto is accessible to people with motor disability : the equipped beach of the marine protected area of Torre Guaceto provides JOB chairs for entry into the water and a walkway that leads to the sea.

Beaches of Salento: Read more information on the beach of Torre Guaceto […]

The most beautiful beaches of Salento: the beach of Marina di Pescoluse

Blue Flag 2018 and Green Flag 2018: the beach of Marina di Pescoluse is one of the most beautiful in Salento. Located in the municipality of Salve, it is nicknamed the " Maldives of Salento " due to the natural characteristics that unite it with the internationally renowned tropical beaches. Yes, a white beach of fine sand and crystal clear turquoise water: these are the peculiarities of the Pescoluse beach. Suitable for both families with children thanks to its shallow waters that allow even the smallest children to bathe and play ashore in peace. Here too the free beach is accessible and the municipality of Salve, of which Pescoluse is a hamlet, has made available to people with physical disabilities a JOB sea chair for entry into the water.

Beaches of Salento: Read more information on the beach of Marina di Pescoluse […]

The most beautiful beaches of Salento: the beach of San Foca

The beach of San Foca was awarded for 2018 with the Blue Flag and is one of the most important not only for Salento but throughout our country in terms of accessibility. It is the first beach to guarantee free access and qualified assistance to people with ALS, with neuromotor disorders and motor disabilities. The accessible area is located at the Terrace: Everyone at the sea ! managed by the voluntary 2HE Association within the IO POSSO project. The beach of San Foca is located in the municipality of Melendugno, in Salento, between Torre Specchia Ruggieri and Roca Vecchia . The beach is narrow and long and composed of white, fine-grained white sand. The sea is crystal clear and near the coves and the rocks you will be able to practice water sports such as snorkeling where you will admire hundreds of species of marine flora and fauna.

Beaches of Salento: Read more information on the beach of San Foca […]

The most beautiful beaches of Salento: the beach of Porto Cesareo

You cannot leave the Salento without having seen at least once the beach of Porto Cesareo, in the province of Lecce. Ideal holiday resort for families with children because the seabed is transparent and gently sloping; Porto Cesareo has in fact been awarded with the coveted Green Flag to demonstrate that it is a child-friendly beach. It is also ideal for those who love scuba diving because there are so many species to observe in the Porto Cesareo Lagoon . The beach is composed of fine white sand and well divided between free beach and beach given in concession to the bathing establishments, in some of the latter they give access to small, medium and large dogs. Among the most beautiful beaches in the area we should mention: Punta Prosciutto Beach and Torre Lapillo Beach, both frequented by both local citizens and tourists from all over Italy.

Beaches of Salento: Read more information on the beach of Porto Cesareo […]

The most beautiful beaches of Salento: the beach of Baia dei Turchi

The beach of Baia dei Turchi is located in the municipality of Otranto, inside the Protected Oasis of the Alimini Lakes, and is one of the most characteristic of the Salento. The beach is composed of both a white, white sandy beach and small coves where you can practice scuba diving . The entire area is protected by a pine forest where to stop during the hottest hours of the day and by sand dunes covered by thick vegetation that releases typical Mediterranean fragrances into the air. The Baia dei Turchi is so named because the legend tells that it was on these shores that the Saracens landed during the siege, and the relative battle, of Otranto of 1480. The beach is also accessible to our dog friends although you are organized with a leash, muzzle, shovel and bag for collecting droppings.

Beaches of Salento: Read more information on the beach of Baia dei Turchi […]

Have you ever been to one of these beaches? Tell us about your experience with a review!