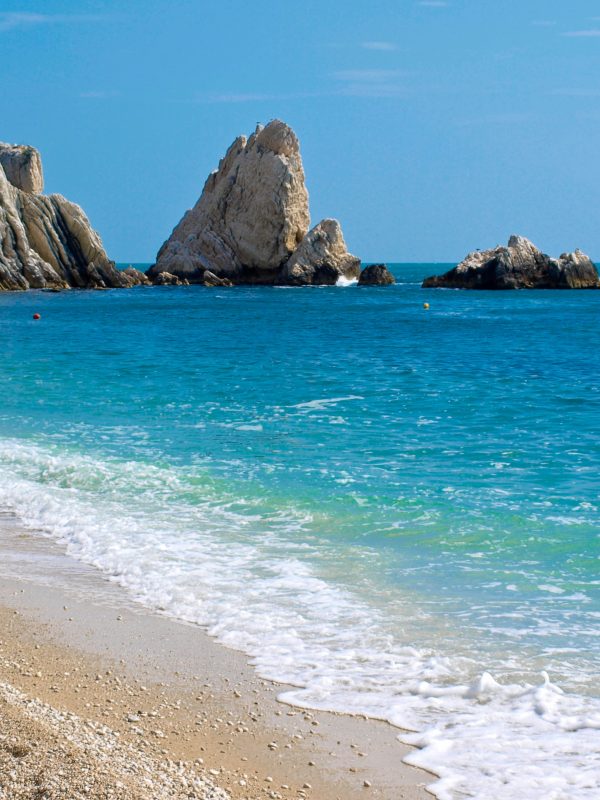 The Riviera del Conero, in the province of Ancona, in the Marche region, offers splendid scenery that can be appreciated not only from the mainland but also from the sea. Real corners of paradise, uncontaminated areas where the blue of the sea meets the white rocks of the splendid Monte Conero. Wonderful places accessible only by sea through the numerous boat itineraries and mini cruises organized on a regular basis.

Book now your boat excursion on the Conero Riviera

For sea lovers, the Riviera del Conero , remains one of the most fascinating places in our country and deserves to be appreciated in all its beauty. Breathtaking bays with hidden beaches and crystal clear sea where snorkeling is the strength of this stretch of the Marche coast.

Those who want to enjoy a new and unforgettable experience, can participate, and book online with a few clicks and in a reliable manner, boat trips that will allow you to admire the coast of the Riviera del Conero from the sea. Highly qualified staff will be at your complete disposal and will show you some of the most beautiful beaches in the Marche accessible only by sea.

There are many daily itineraries that you can choose and that will lead you to discover corners of paradise hidden among the coves of the Conero Natural Park. Beaches not reachable on foot where you can practice diving, sailing dinners or canoeing at sunset. An experience completely different from the usual with which you will know splendid uncontaminated places far from the chaos of the city. 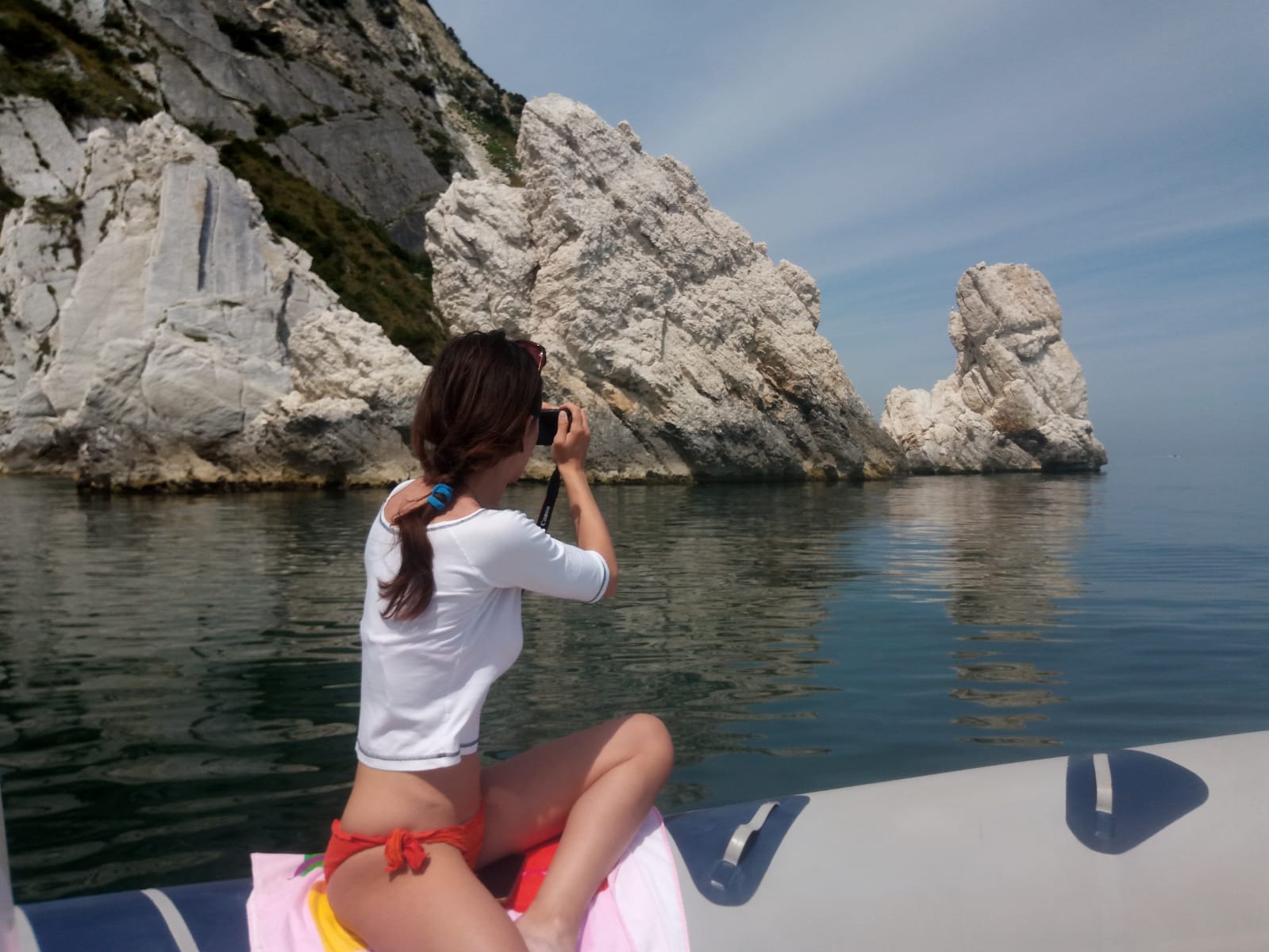 Departures take place from the tourist port of Numana and with a day at sea you can visit some of the wildest beaches on the middle Adriatic coast including:

Baia dei Gabbiani: a sheltered cove composed of very white sand where the Monte Conero descends steeply into the sea, deep blue, giving rise to the Spiaggia dei Gabbiani. A pristine place reachable only by sea.

The Trave Beach: A beach of sand mixed with gravel famous for its natural rock, the Trave , which emerges from the water and extends for several hundred meters. This rock is a rare example of a natural pier, as it shelters the beach from storm surges and marine erosion.
On the initial part it is still possible to see the fishing station Casotto Fattorini , one of the two pile-dwellings built around the 1950s, which resisted the elements of the sea and served as a fishing stopping point for the moscioli (wild mussels typical of the Riviera del Conero).

Baia di Portonovo: jewel of the Regional Park of the Conero, it extends in an uncontaminated naturalistic context. A place to admire nature in its wildest expression, where the green of the Mediterranean scrub reaches almost touching the crystal blue of the sea. The beach is formed by a landslide that broke away from Pian Grande, and in the remote era it shines with the white pebbles of Conero stone smoothed by the waves.

Along the beach it is possible to meet significant historical evidences such as the Guard tower of the 18th century and the Napoleonic Fort that is now used as a hotel.

The Due Sorelle Beach: so called due to the two twin rocks that emerge from the clear waters, and that when viewed from the North resemble two nuns in prayer. Even this beach can only be reached by sea so there is no service; it is therefore advisable to bring an umbrella and basic necessities. 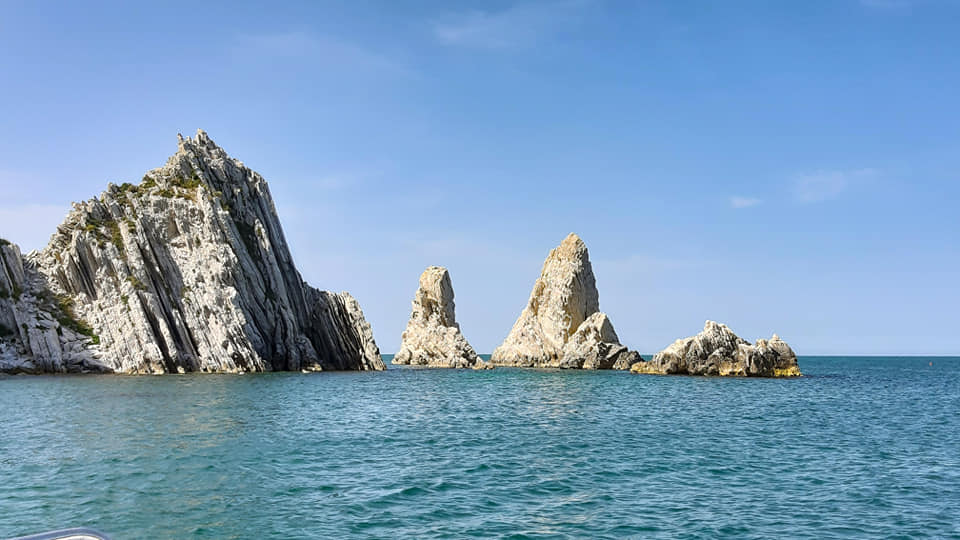 Not to be missed is the historic route on board of ancient boats , where it will be possible to immerse yourself in the past; from Numana to Baia Davanzali, a journey to discover the life, the stowage, the fears and the difficulties of navigation in antiquity. You will discover the legends related to the Grotta degli Schiavi now no longer visible, the Urban Cave and the Two Sisters.

The beach on which stands the Urban Cave, can also be reached from the mainland, and is made up of fine gravel. Protected on one side from the cave and on the other from the cliff, it is a beach suitable for those seeking the typical calm of coves.

Are you still looking for the ideal place to spend your holidays or have you already chosen the Conero Riviera as a destination for a day at the beach? Have you ever crossed the waves on a rubber boat? Are you curious to enjoy a splendid dinner on a sailboat, admiring the sunset?

If you haven’t done it yet: book now your boat excursion on the Conero Riviera!