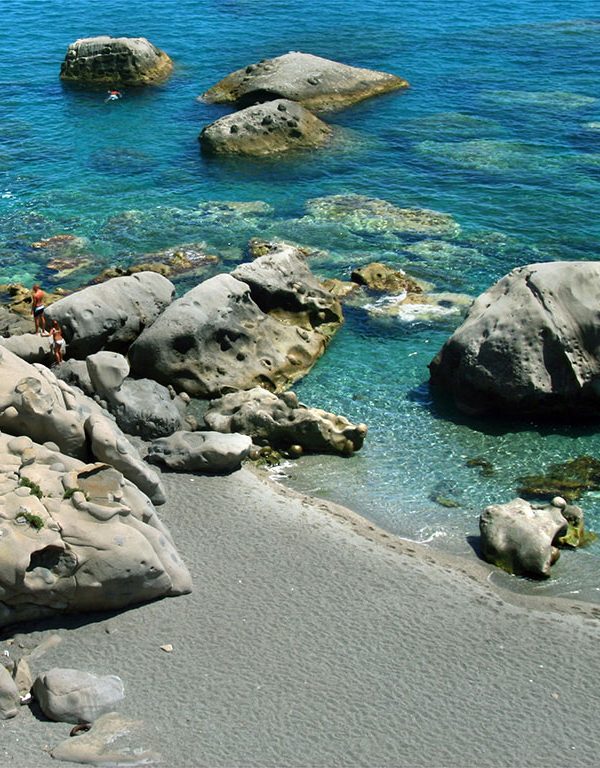 The most beautiful beaches of the Jasmine Riviera in Calabria: Bovalino, Locri, Siderno, Roccella Ionica and Bianco.

The most beautiful beaches of the Locride

The Riviera dei Gelsomini, also known as the Costa dei Gelsomini or Locride, is located in the province of Reggio Calabria on the Calabrian side of the Ionian Sea and owes its name to the homonymous perfumed creeper which is cultivated especially in this area. The beaches of Locride attract thousands of tourists from all over the world every year thanks to the wild and unspoiled nature that dominates sovereign. The five most beautiful seaside resorts of this stretch of coast, which goes from Punta Stilo to Capo Spartivento, are: – Bovalino beach – Locri beach – Siderno beach – Roccella Ionica beach – Bianco Da beach see : Many testimonies of past civilizations that lived in these places as evidenced by the excavations of Locri Epizefiri and Kaulon that date back to the Greek period or the Naniglio of Gioiosa Ionica which dates back to the Greco-Roman period. The Riviera dei Gelsomini in Calabria is also famous for the presence of places of historical and scenic interest such as the Aspromonte National Park and the Stilaro Valley . Also the culinary tradition of the area is based on local, genuine and organic products; among these we must mention: the extra virgin olive oil of Locri, the pecorino of Stilaro, the caciocavallo of Ciminà, the red Doc wine of Bivongi and the Doc Greco di Bianco wine and cured meats like sausages, soppressate and capicollo flavored with chili and wild fennel produced throughout the area. The Riviera of the Jasmines is a wonderful place to spend your holidays both for the beauty of the landscapes and its beaches and for the presence of services and accommodations such as hotels and bed and breakfasts suitable for hosting visitors of all ages and backgrounds with one eye concerning families with young children. Yes, Calabria was a revelation this year in the assignment of the Green Flags by the Italian Paediatricians Association for child-friendly beaches because for the summer of 2018 two other municipalities entered the list: Bianco and Squillace, doing so become the Calabria region the one with the largest number of Green Flag beaches in all of Italy.

Bovalino Marina is a seaside resort that has won for the summer 2018 the prestigious Green Flag with its wide sandy shore where you can play on sand mixed with gravel. Not only that, but also the presence of services dedicated to children, such as the presence of bathing establishments with diaper changing tables, the crystal clear sea water and the seabeds that make it possible to have fun safely on the shore, have also contributed. However, the beach of Bovalino Marina is not only frequented by families, it is also a destination for the summer holidays of many young people who are attracted by the events held near the beach. The beach is narrow and long and well distributed between the public beach and given in concession to the bathing establishments: you can therefore choose independently whether to rent chairs, umbrellas, sunbeds and equipment to play sports both on the water and on the beach.

Locri is undoubtedly the most famous of the beaches of the Jasmine Riviera; this Calabrian seaside resort also overlooks the Ionian Sea and was awarded the 2018 Green Flag. The Locri beach is narrow and long and composed of clear sand mixed with gravel. There are also rocks on the water that will allow you to practice water sports like snorkeling and scuba diving and admire all the species of flora and fauna that live here. The sea is of a wonderful color that changes depending on the solar refraction and can fade from the turquoise of the shore to cobalt blue off the coast. Locri is a town rich in history, witnessed by the ruins and excavations of Locri-Epizefiri where you can visit the Ionian Temple of Marasà, the Thesmoforion, an ancient sanctuary dedicated to the Goddess Demeter and the Sanctuary of Mannella dedicated to the Goddess Persephone .

Write your review on the beach of Locri

Siderno Marina is another seaside resort in the Calabria region to have won a 2018 Green Flag and is also part of the Jasmine Riviera. The beach of Siderno has a narrow and long beach and is composed of sand mixed with light colored gravel. Also noteworthy is the presence of a beach establishment that makes the beach accessible to people with motor disabilities: it is the Lido UILDM ( Italian Union for the Fight against Muscular Dystrophy ) located on the Lungomare delle Palme. Many events are organized in this fantastic seaside resort such as the Campagna Amica initiative, managed by Coldiretti, which is held every Sunday morning and where it is possible to buy zero-kilometer products directly from local farmers.

Write your review on the beach of Siderno

The beach of Roccella Ionica, or Roccella Jonica, is among the most appreciated and popular on the Riviera dei Gelsomini. The Green Flag and the Blue Flag 2018 by the FEE ( Foundation for Environmental Education ) show how the Calabrian town is attentive to the needs of its citizens and tourists who choose it as a destination for their holidays. Special attention is also given to pet owners because Roccella Ionica is a pet-friendly beach as it is possible to take their dogs to the Dog Beach located north of the waterfront as long as they have a microchip (or tattoo for friends at four older paws) and that they are up to date with vaccinations. The beach is narrow and long and composed of sand mixed with light gravel. There are bathing establishments but the coast is well distributed between public and in concession.

The beach of Bianco won the Green Flag for the first time this year, this shows the attention that local administrations are giving to their territory to make it comfortable even for families with small children. Bianco is a quiet seaside resort, where relaxation and silence reign supreme and owes its name to the white gullies that surround the town that are nothing more than rocky walls of limestone origin. The beach is narrow and long and composed mainly of light sand, the seabed gently slopes down and is rich in flora and fauna to be admired with a mask and snorkel. The context in which the beach of Bianco is inserted is heavenly, let's talk about Capo Bruzzano : one of those places that you have to see at least once in your life. Here the nature dominates wild showing all its splendor through the vegetation that thrives on the whole stretch of coast.

Write your review on the beach of Bianco

Become part of our community:

leave a review on the beaches of the Riviera dei Gelsomini

the portal of Italian beaches