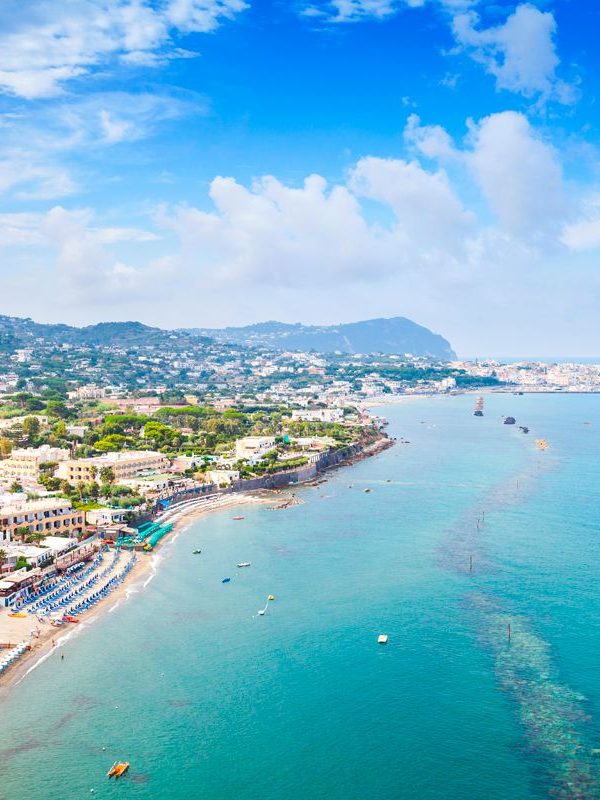 Beach, travel tips to combine relaxation and well-being: The thermal baths of Ischia

The beaches of Ischia where you can combine the relaxation of the beach with the wellness of the Spa.

Naturally cure bronchitis and sinusitis, where to go?

The melancholy dictated by the soft colors of autumn is amplified by the typical ailments of this season . They are frequent in this particular time of the year: pharyngitis, bronchitis, otitis, tracheitis and sinusitis, just to name a few. The sudden change of temperatures certainly does not help and it can happen that the person with the most efficient immune system is also cooled. How can the sea and the beach help us in these cases? What are the benefits of a day spent at the beach? Can we consider real natural cures? In addition to Vitamin D synthesized by our body when we expose ourselves to the sun, useful for the correct functioning of our immune system, sea water is rich in iodine, sodium chloride and magnesium, potassium, calcium, bromine and silicon; all mineral salts that help to clear the respiratory tract. It is no coincidence that taking a trip to the beach is one of the most widespread recommendations by doctors to those who suffer from chronic respiratory diseases or to people who have small children. The dancing climate of the last days does not come to our rescue, a walk on the beach could worsen our respiratory problems instead of improving them. It is therefore advisable, in addition to following the therapy prescribed by your doctor, to cover yourself well before walking on the shore and avoiding the beach in case of rain and / or wind. The sea and the beach can therefore be considered natural cures for seasonal ailments, even more so when they are located in the territory of seaside resorts famous for the presence of spas useful also for this kind of problems. A place that combines relaxation and thermal benefits? The Island of Ischia, in the province of Naples, is the travel proposal that we suggest this week. The Island of Ischia has a volcanic origin and is famous above all for the presence of many thermal parks that with the beneficial properties of their waters and a high level welcome attract tourists from all over the world. The spas of Ischia are among the oldest in Europe, just think that the Romans already knew the therapeutic properties of the springs of Ischia and are mentioned by authors of the time such as Pliny the Elder and Strabo . Why visit the beaches of Ischia at this time of year? Precisely because of the presence of 69 fumarolic fields and 29 hydrothermal basins from which 103 spring emergencies are used to treat pathologies with volcanic mud, baths and thermal showers, as well as therapies to help the respiratory tract such as halotherapy, salt caves, humages and mineral sprays . The most characteristic therapy of the Terme di Ischia is undoubtedly: antrotherapy . This is to stay in caves, natural rock caves, useful for treating chronic inflammation of the lower and upper respiratory tract. These caves have a high temperature ranging from 46 to 70 degrees thanks to the proximity to hot water sources and the temperature fluctuates so much, depending on the cave in which we introduce ourselves, due to the percentage of humidity present in it; the less the cave is damp, the higher the internal temperature will be. The Antrotherapy practiced at the Ischia spa has both a curative and a preventive function if carried out regularly. If any of you wanted to combine the natural treatments of the sea with thermal treatments: you could come to the beach. The Campania region has many stretches of coast where you can escape the chaos and stress of the city. Some beaches are easily accessible and well connected by public transport to city centers, while others can only be reached by sea. Even in this case, however, it is not impossible to get there, simply renting boats and taxi-boats that regularly circumnavigate the entire island. The beaches of Ischia have different characteristics and are suitable to satisfy both those who love sandy beaches and those composed of gravel and rocks. Some beaches are not far from the most important centers and consequently in the summer they are to be considered high attendance. Considering the area of 46.3 km² of the territory of Ischia: it will not be difficult to find a beach not far from the thermal park where you have booked your autumn stay.

Let's see some of the beaches of Ischia in detail:

BEACH OF THE MARONTI: One of the most famous beaches of Ischia is without a doubt the beach of Maronti in the municipality of Barano . Located at the southern end of the Campania island: the Maronti beach, also known as Lido di Maronti, has a large grain size and a grayish color, confirming the volcanic nature of the island of Ischia. The sea is of a wonderful iridescent color that goes from the turquoise of the shore to the cobalt blue of the open sea. In the immediate vicinity of the beach you will find both thermal springs and numerous accommodation facilities suitable for hosting tourists of all ages and backgrounds. CARTAROMANA BEACH: Another beach of Ischia that we propose is the beach of Cartaromana, one of the most suggestive of the whole island. The beach of Cartaromana is of modest size, both free and run by a beach establishment and offers a breathtaking view both over the Scogli di Sant'Anna and over the Aragonese Castle of Ischia . Here we find a fine granulometric composition, with rocks emerging from the water, and a lighter color than the Maronti beach. An ideal place for those who like to practice snorkeling because not far from the shore there is the marine archaeological area where there are the ruins of the ancient Roman city of Aenaria that has been hidden, for centuries, by Posidonia. CHIAIA BEACH: The Chiaia beach of Forio is another of the beaches of Ischia where you can stroll during your stay to practice the beneficial thermal cures of the Campania island. It is one of the largest beaches on Ischia and has a narrow and long beach protected by breakwater barriers that are intended to mitigate the erosive action of the sea. The beach is composed of fine sand with a light color and equally divided between a free and managed beach; easily reachable on foot and suitable for children because the seabed is not immediately deep. Many accommodation facilities just a few meters from the sea where you can stay overnight and restaurants that boast century-old recipes belonging to the island's culinary tradition. Not far from the Chiaia beach of Forio there is also a marina where you can either moor your boat or rent one. ENGLISH BEACH: On the north side of the island there is the beach of the English located in the territory of Ischia Porto. Small in size, about two hundred meters, and composed of large-grain sand with a grayish tint. It can be reached via a stone staircase and is never too crowded. The beach of the English is also suitable for children because the seabed is sloping and is one of the most characteristic of all of Ischia. Not far from the beach there are some of the most prestigious Ischia thermal parks where you can spend your holiday relaxing and well-being. CITARA BEACH: The last beach of Ischia that we recommend for a beneficial walk by the sea is the beach of Citara, in the municipality of Forio . This is one of the most popular seaside resorts and is located a short distance from Ischia's oldest spa. Near the shore there is a spring whose waters gave birth to many myths and legends of the past. The Citara beach is composed of clear sand of large granulometry and bathed by a crystalline sea, it will be possible for you to either stop in the public area or rent equipment at the beach establishments. Being situated in a bay sheltered from the winds, and on the west coast of the island of Ischia, the beach of Citara is one of the most suitable destinations for admiring the setting sun.

And have you ever been to Ischia? Why don't you tell us about your experience?