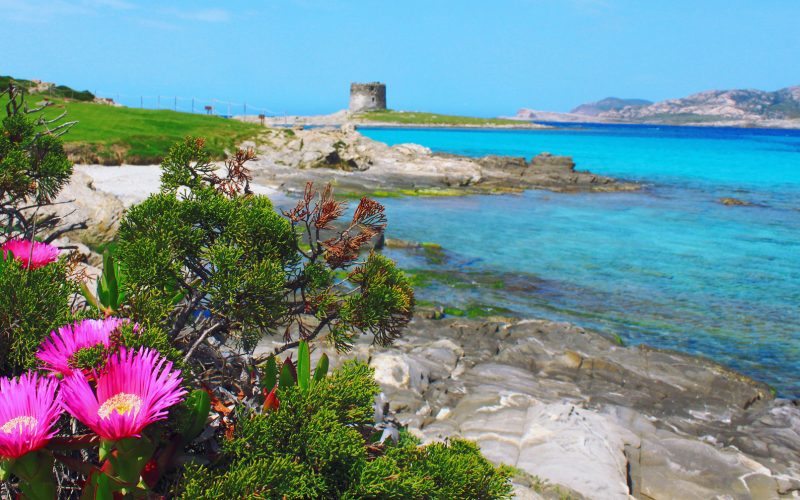 La Pelosa beach is located in the Stintino Peninsula, in the province of Sassari, on the north-western tip of Sardinia, within the Gulf of Asinara . It is one of the most beautiful beaches in Europe, nothing to envy of the most famous tropical paradises. It is divided into a free beach and stretches of lido equipped with bars, restaurants and rental services for sunbeds and umbrellas. The Pelosa is a fairly long strip of sand, and is composed of very fine white sand ; the seabed is clear and sandy, very low that slopes gently and makes it perfect for families with children . The sea is crystalline with shades in colors ranging from turquoise to blue. This beach is protected from the swell by a natural barrier formed by the stacks of Capo Falcone, the Isola Piana and the Asinara, and therefore the sea is always calm, even in the presence of strong mistral wind. This sand paradise is framed by juniper and Mediterranean scrub. Right in front of La Pelosa di Stintino beach there is a sandy island with an Aragonese tower, symbol of the beach, which can be reached on foot after crossing the small beach of La Pelosetta . From the port of Stintino there is a service of small motor vessels for the Asinara Island, which is a natural reserve and park, beautiful to visit. The town of Stintino is about 5 kilometers from the Pelosa Beach, and there is a shuttle service to the beach in the summer months. La Pelosa beach is accessible to the disabled through a walkway that leads directly to the beach, even if the toilets are located high up and therefore difficult to reach. It is a beach with very high attendance that in the future could become a limited number, to preserve its beauty. To protect the integrity of this place, starting from 2018 a series of restrictive measures have been implemented for visitors: for example the prohibition of smoking, in order to avoid finding cigarette butts buried in the sand, or the prohibition of lay towels without putting under a mat or having to shower before leaving the beach, to avoid carrying away the beautiful sand. For nature lovers the seabed is very rich, so this beach is popular with snorkeling and diving enthusiasts. The Pelosa beach can be reached from Porto Torres and Stintino along the state road 131 and, before the Spanish tower, take a small road that leads to the beach of Saline, then following the road signs.