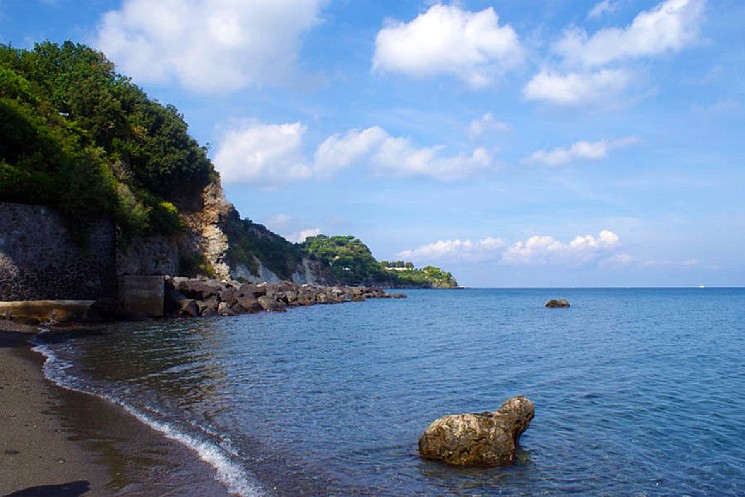 The English Beach, also known as Sant'Alessandro Beach, is located near Ischia Porto and is just over 200 meters wide. There is a beach club and a small public beach. END_OF_DOCUMENT_TOKEN_TO_BE_REPLACED

Just 800 meters from the port, a strip of sand of about 200 meters, outside the " classic " tourist tours that prefer the more crowded beaches of Lido, Maronti and Citara; tourists generally favor comfort and the presence of restaurants and bars by the sea. The Beach of the English, as it is known to most, is located at the bottom of the village of Sant'Alessandro: a beach for the inhabitants of the beautiful village. the Borgo di Sant'Alessandro is located under the former Strada Statale 270, not far from the Oasi Castiglione Park which, together with the Poseidon of Forio and the Negombo of Lacco Ameno, is one of the most important thermal parks of Ischia. Opposite, there is also a public parking for cars and motorcycles; alternatively, a small pedestrian street that from the Olympic Quay, the dock for ferry boats, goes up to the village, famous for being the home of the archaeologist Buchner, who discovered the famous Nestor's Cup and, in more recent times, for the parade in period costumes of August 26th, the Saint's anniversary. To get to the Spiaggia degli Inglesi you have to walk a narrow path of stone stairs, " protected " on both sides by wisteria and bougainvillea. It is one of the most fascinating bays of the island of Ischia, reachable by sea with the comfortable taxi boats departing from Ischia Porto and Ischia Ponte, under the Aragonese Castle. It is a sheltered beach and suitable for families with children because the seabed does not have the usual step after entering the water but gently slopes towards the open sea. There is also another reason why it is suitable for those with small children: thanks to the exposure to the north it is not very sunny, at least not from the early morning hours. this is why it is considered " cold beach". Even from a geological point of view, the beach, but above all the next ridge of Cafieri and Castiglione is an important testimony of the effects of magma rising on the soil. geological-environmental of the island of Ischia published by the Campania Region, the geological site in question exhibits successive sedimentary deposits, a sign of an intense and prolonged volcanic activity that affected the northern side of the island starting from about 6000 years ago. the Beach of the English ideally represents the beginning of a volcanological excursion of the island of Ischia, to discover the geological history of the largest and most beautiful island in the Gulf of Naples.